Mulberrys is the result of one man’s frustration with his dry cleaner. 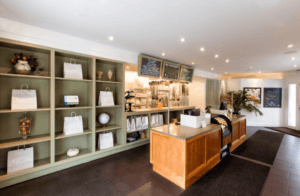 Dan Miller’s previous professional incarnation put him in the daily corporate uniform of suit and tie. As a management consultant at the Minneapolis office of McKinsey & Company, “I was a big dry-cleaning customer, and I was pretty frustrated on a consistent basis,” Miller recalls. “The in-store experience was unpleasant, or the toxic chemicals were unpleasant, or the quality just wasn’t very high.” An inviting store, green cleaning techniques, and high-quality service would give a dry cleaner “a significant competitive advantage,” he figured.

Miller took a leave of absence from McKinsey, then went on a cross-country tour to see more dry-cleaning businesses, observing what worked (good service and attention to quality) and what didn’t (pretty much everything else, in his opinion). Then he attended Maryland’s Drycleaning and Laundry Institute, which instructs students how to do laundry and dry cleaning at a professional level. In January 2009, Miller began Mulberrys as a cleaning and delivery service, opening his first retail store a couple of months later. He funded the start-up with savings and some capital from family members, and later with SBA loans.

Why the name Mulberrys? “I wanted a name that reminded you of a classic British tailor shop, but at the same time something natural,” Miller says. “Mulberry Street is a famous street in both London and New York, and obviously mulberries are a natural fruit. I focused-grouped the name with a bunch of people and everyone loved it.”

Miller aims to distinguish Mulberrys from other dry cleaners in a number of ways. One is by eliminating or reducing the environmental impact of its work. It doesn’t use the traditional dry-cleaning solvent perchloroethylene (also called tetrachloroethylene and abbreviated “perc”), a substance that the International Agency for Research on Cancer has classified as a potential carcinogen. Instead, Mulberrys uses a combination of carbon dioxide and environmentally friendly cleaning liquid. (Cool Clean Technologies, based in Eagan, developed the original carbon dioxide cleaning technology. Mulberrys bought a system that incorporates carbon dioxide and a biodegradable cleaning liquid from Illinois-based Solvair.) In addition, Mulberrys uses bags that biodegrade within 30 days, and Miller plans to buy an electric delivery van as soon as such vehicles become available.

The stores themselves “smell nice,” Miller says, with free coffee, detergents, and cold drinks for sale, hardwood floors, and “a nice overall environment.” They’re open seven days a week until nine o’clock, a nod to the days when “I would find myself leaving work to pick up my dry cleaning because the dry cleaner was only open until six,” Miller says.

The shops offer free home and office delivery, as well as pickup and drive-up service at several locations. Mulberrys also has installed what it calls a “Berry Box” at the Ridgedale Byerly’s. Something like a laundry ATM, the Berry Box lets customers drop off and pick up their clothes without interacting with Mulberrys staff. The box’s technology connects it to bar-coded orders on the main conveyor system in Rosedale, letting customers get their orders whenever Byerlys is open.

“Mulberrys is a local business that shares our commitment to quality, service, and innovation,” says Phil Lombardo, vice president of sales and marketing for Lund Food Holdings, the parent of Byerly’s. “We’ve partnered with them as part of our continuous effort to enhance our customers’ shopping experience. It’s one less stop our shoppers have to make. Why not make their lives easier?”

Another differentiator: Miller hated when dry cleaners lost his clothes or put other customer’s clothes in his order, so Mulberrys bar-codes garments to ensure that the correct items are in each order. The company also uses an automated assembly system that circulates garments until a customer’s entire order is ready. “I’m not going to put your favorite shirt in someone else’s order,” Miller says. In addition to cleaning, Mulberrys offers others services, including tailoring and alteration and shoe repair.

According to Miller, the response to Mulberrys “has been phenomenal.” Good enough, at least, for the company to now operate in six locations: St. Louis Park, Minneapolis, Edina, Eagan, the Ridgedale Byerly’s, and its original cleaning facility in Roseville. Mulberrys will have more than $2 million in revenue for 2011. Miller estimates that, by December 2012, his company will be on track to earn $3 million annually.

Mulberrys plans to continue expanding its presence in the Twin Cities and hopes to open its first stores outside Minnesota next year, perhaps in Chicago or New York. “Eventually, we’d like to be a known national presence in dry cleaning,” Miller says.