Would you like to use this promotion in stores or schedule a pickup and delivery?

We are huge Halloween enthusiasts at Mulberrys Garment Care, spending weeks brainstorming the most clever costumes then carefully preparing the outfit we’ll wear on the big evening in the subsequent weeks. Whether you lean toward the classic Halloween costumes or pick a trendy, modern one – we enjoy them all! No matter how old you are, Halloween brings a certain indescribable magic and is a fun and festive time of year that gets the entire family involved in costume planning.

Most Popular Halloween Costumes in 2021

While Halloween may have looked different in 2020 than in years past, costumes and responsible family fun were still a huge part of how Americans celebrated this timeless holiday. This Halloween, we may see masks for protection and your typical goblin and ghoul face coverings. Whether you choose to celebrate with a socially distanced party, video calls, or safely stroll around in public if you’re in search of a costume, here are some recent trends from this year and years past! With family and friends eager to celebrate abiding by their State guidelines, be ready to see some familiar costume favorites in 2021.

If you plan on reusing your quarantine costume, Mulberrys’ dry cleaning delivery and pickup service is a great option to consider for your family!

According to Google Trends, some of the most popular Halloween costumes searched for in the United States in 2021 include:

Which Popular Halloween Costume was a State Favorite from 2015-2018

When thinking about the best Halloween costume to wear, you may also start thinking about what the most common or popular Halloween costumes have been in past years. Google is always one of the first places we turn to drum up costume ideas, so we decided to use Google Trends search data to dig into the most popular costumes across the country for 2015-2018. We looked at the number of searches for some of the most frequently popular US costumes according to Google Frightgeist, along with those related to the most buzzworthy TV shows, movies, people, and current events of each year.

And since Disney Princess costumes are consistently popular every year, we looked at which of the princesses is  the most popular costume in each state. Here’s what we found! 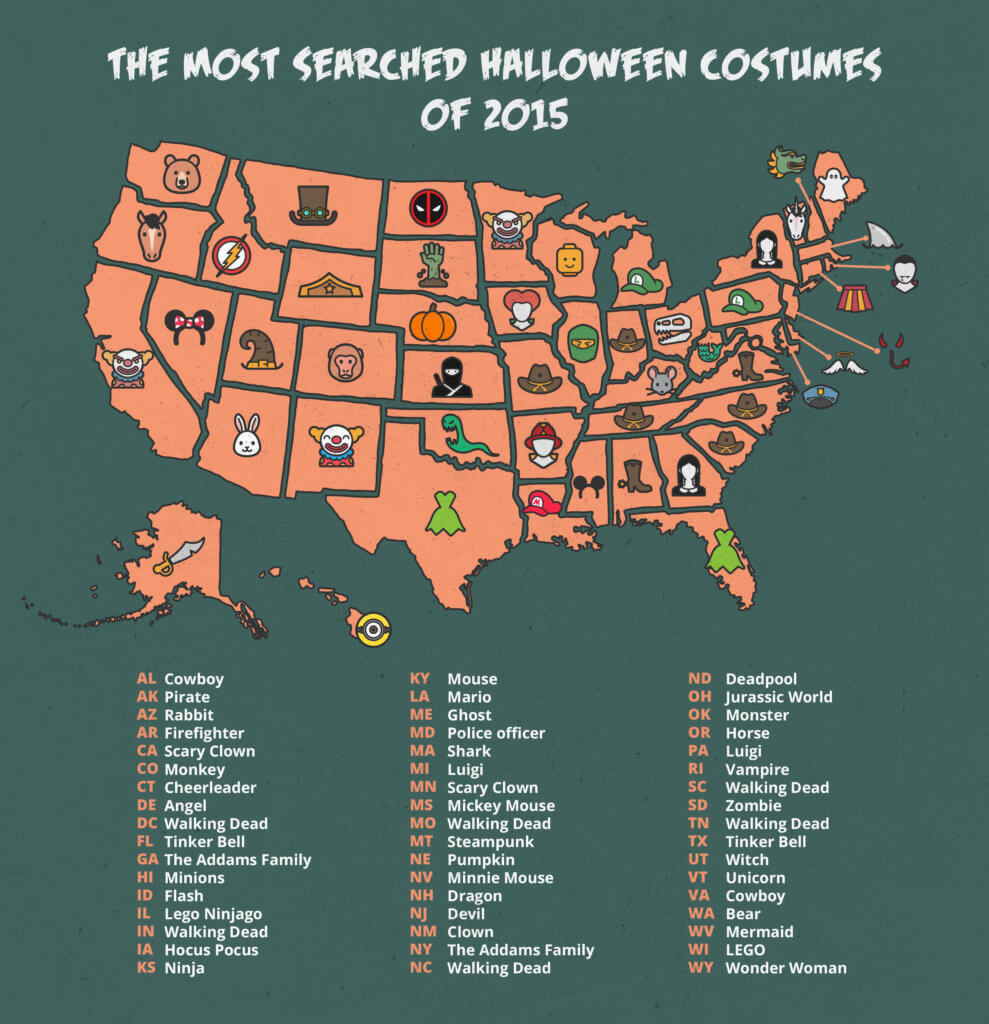 There was quite a bit of variety in costumes year to year, and especially so in 2015. From classic Halloween costumes like clowns and cowboys to trendier movie-related costumes like Jurassic Park and Deadpool, 2015 was a mixed bag. What’s going on in the news and pop culture typically has a direct effect on what costumes Americans select each year, so it’s no surprise to see that the Walking Dead inspired costumes in the highest of states – the most searched in North Carolina, South Carolina, and Tennessee. We think the Walking Dead could certainly benefit from our wash and fold services.

And now that we think about it, we do recall seeing one too many scary clowns while trick or treating in San Francisco – can we all agree that there are few things scarier?

2016 was an eventful year in news and politics since it was an election year. it’s not uncommon to see candidate costumes roaming around on Halloween, which helps explain why Hillary Clinton was the most searched costume in New York. And while Donald Trump didn’t make the map, his wife Melania was the most searched costume in Florida. The Teenage Mutant Ninja Turtles originally debuted in the early 90s, but they’ve seen a resurgence in popularity over the past few years. As a result, they were one of the most overall popular costumes of 2016 – the most searched in Michigan, Minnesota, Virginia, and Washington.

Sometimes the simplest costumes end up being the most memorable. It’s interesting to see how consistently popular basic-seeming animal (both real and mythological) costumes are through the years. Mice, bears, sharks, dragons, and horses continued to see popularity in 2017. Compared to 2015 and 2016, 2017 seems to be the most impacted by popular TV shows and movies like Game of Thrones and Justice League. 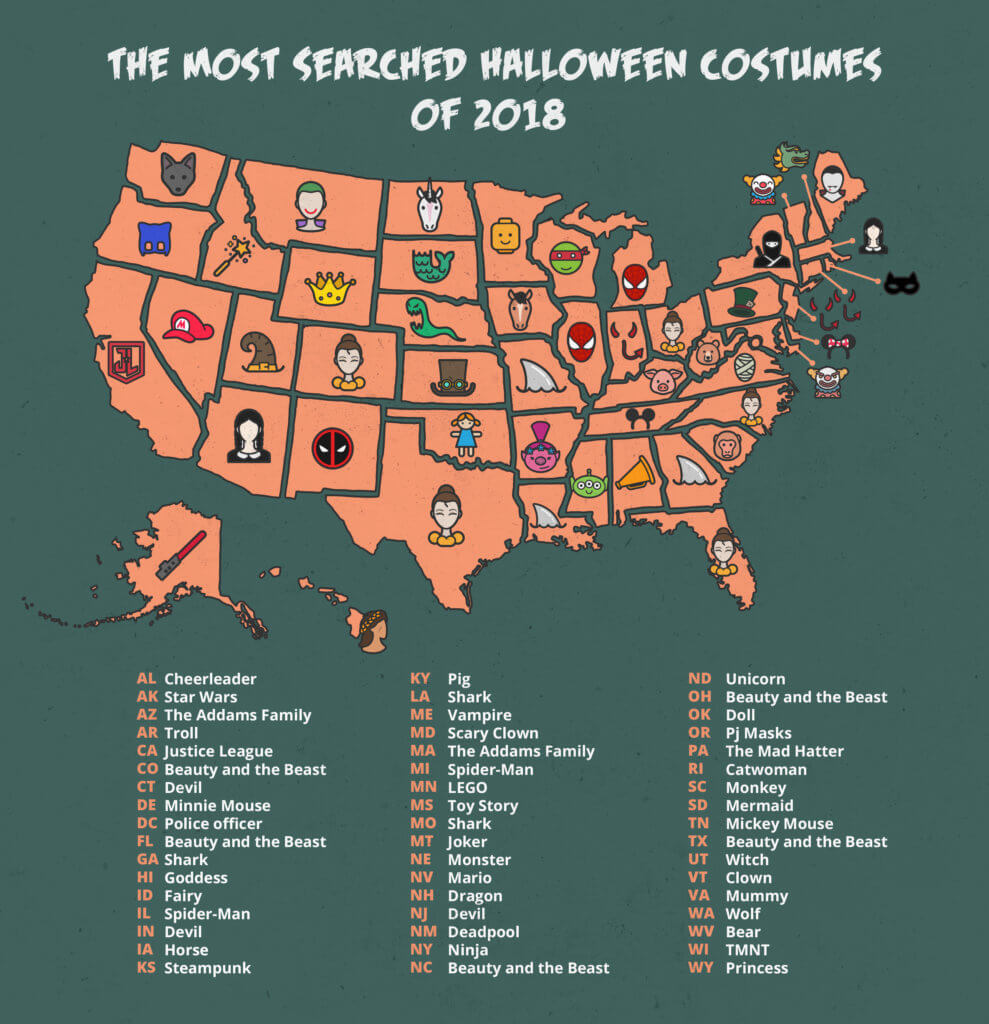 Now that we’ve taken a look into past years, what can you expect to see while trick or treating this year? Based on the data, we can bet you’ll run into at least one Belle or Beast over the course of your Halloween evening. We’re pleased to see classic Halloween costumes like witches and vampires maintain their popularity. 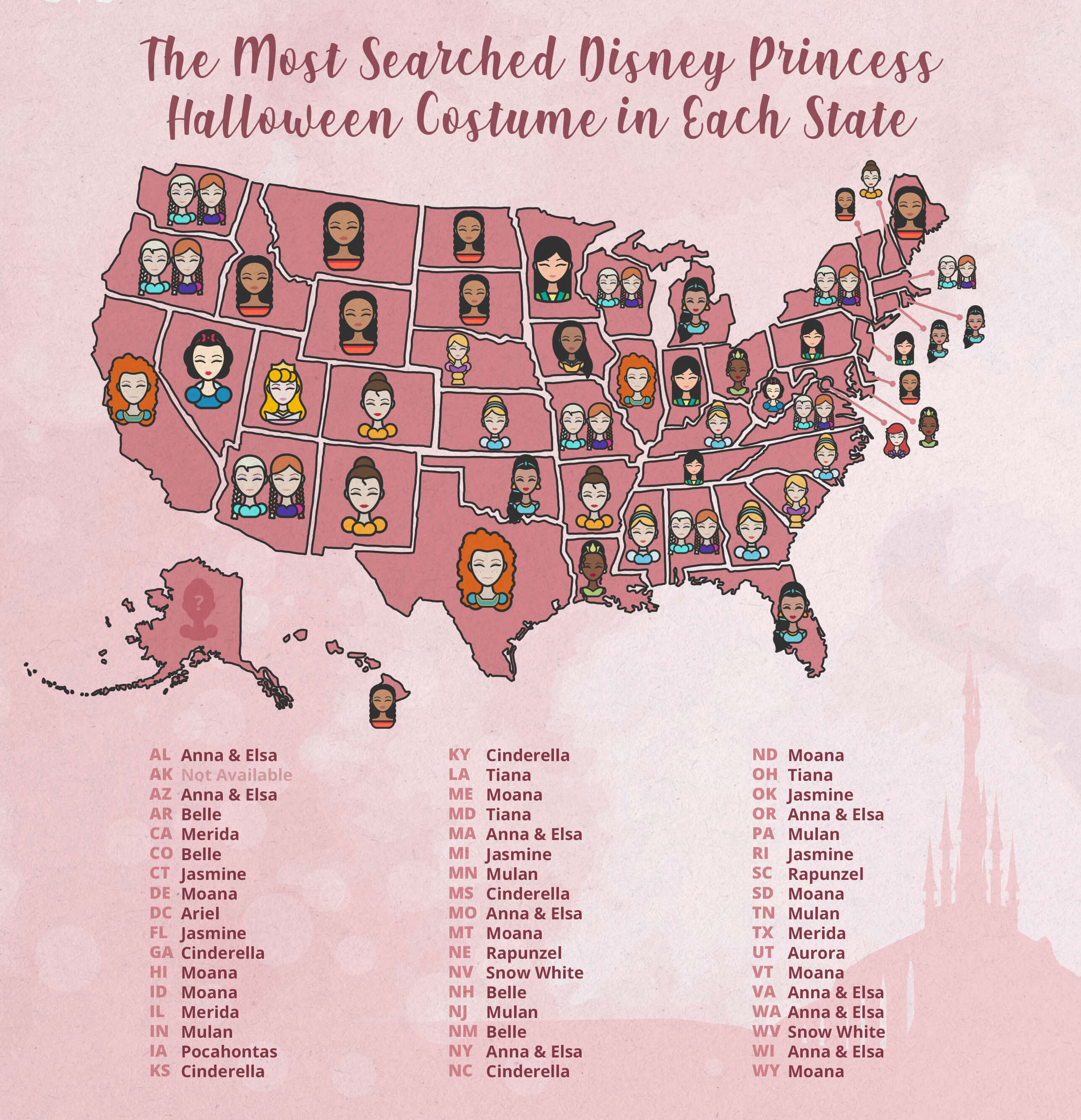 One trend that we noticed as we dug into the most popular US costumes of past years was the consistent presence of Disney-inspired costumes, but which ones will we be seeing this year? We looked at searches for all of the Disney Princess costumes and were surprised by the results. Despite the fact that Moana and Frozen are more recent Princesses, the classic gang continues to inspire costumes. Ariel, Belle, Jasmine, Cinderella, and Snow White all make appearances on the map in at least one state.

Whether you’re a Cinderella with a glass slipper in need of a shoe shining, a Snow White in need of a little tailoring – from non-animal friends, or a Princess Jasmine and want to spruce up your magic carpet rug, Mulberrys is at your service.

Keep your Halloween costume looking great and ready for next year by bringing it to any of our dry cleaners in Minneapolis and San Francisco!